Chimney Park Recognized as one of Continent’s Best

WINDSOR — A think tank forms in the kitchen before every shift at Chimney Park Restaurant & Bar.

In a matter of hours, the night’s elite four-course tasting menu is drafted from scratch, giving diners a unique fine-dining experience at every visit to the downtown Windsor restaurant.

The Chimney Park team, guided by owner and chef Jason Shaeffer, draws on Shaeffer’s experience in New York City and San Diego kitchens, the ever-changing Colorado weather forecast and the wine they sip for inspiration along the way.

“The kitchen here is like a symphony,” said Kimberly Brodsky, a Chimney Park server of three years. “They are so in sync, with (Shaeffer) like the conductor. It’s amazing the way they can create these elegant menus on a whim.”

That creativity has long made Chimney Park, 406 Main St. in Windsor, a Northern Colorado favorite for fine dining and special occasions, but now the restaurant has joined an elite class of restaurants on this continent.

Chimney Park was recently one of 13 restaurants added to the Distinguished Restaurants of North America (DiRoNA) list in 2016, joining less than 600 other U.S. establishments on the 25-year-old list. An anonymous diner, who teased the impending nomination in an email, certified the establishment after a thorough inspection of the decor, cuisine, beverages, and service.

There are 27 other Colorado restaurants with the DiRoNA distinction — half of which are located in either Denver or Vail — but no others in Northern Colorado.

“We are pretty honored,” said Shaeffer, who has run Chimney Park for the past decade. “As a young chef, I remember (DiRoNA) was a prestigious thing. It was something to shoot for.” 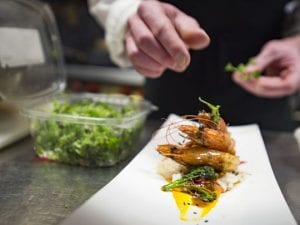 New Caledonian prawns are are prepared in the kitchen at Chimney Park Restaurant and Bar in Windsor. (Photo: Austin Humphreys/The Coloradoan)

Prior to buying Chimney Park from a previous owner in 2007, he put together nightly five-course wine pairings as executive chef at Elizabeth’s Cafe in the tourist-heavy Duck, North Carolina, served as sous chef under famous chef Thomas Keller at New York City’s Per Se and later ran the trendy Laurel Restaurant in San Diego.

Many of Shaeffer’s proteges have gone on to run their own restaurants, including a few also featured on popular food television shows, including Bravo’s Top Chef and Food Networks’ Chef Wanted.

Shaeffer, who also runs Hearth Restaurant across the street from Chimney Park, is meticulous about hiring. He probes potential candidates on their favorite wines and why, what they cook at home and their favorite local restaurants.

“He’s calmed down a little over the years,” said John Gutierrez, Chimney Park’s current Chef de Cuisine who has worked at the restaurant for the past five years. Chimney Park has a staff of about 18, most of whom have at least a decade of industry experience.

“When I first started, (Shaeffer) worked on the line all the time and he was very intense…He’s always been very straightforward and very passionate.”

Shaeffer is most passionate about picking the right ingredients, a philosophy he developed subconsciously as he grew up crabbing, farming, and hunting in rural Virginia. Years later, he still vividly recalls eating freshly-picked tomatoes, strawberries, and cucumbers from his family’s large garden.

That’s why Chimney Park sources high-end products from around the world, with little concern for food budgets.

Local vegetables are collected when in season. Fresh seafood is delivered every two days. Various other ingredients come in via Fed Ex, like Hawaiian hearts of palm and French truffles for New Year’s Eve.

Along with the rotating daily chef’s tasting menus, the restaurant has a monthly a la carte menu, monthly wine dinners and special prix fixed menus for major holidays.

“The creative freedom here is unheard of,” Gutierrez said. “Especially for a kitchen in Northern Colorado.”

And the DiRoNA recognition certifies the restaurant is truly unlike any others in Northern Colorado.